I thought I'd share a few things related to Bookie Woogie that happened even while Bookie Woogie wasn't happening.  In fact, I've got three, count 'em three, cool things to share...

You may remember our review of a great book called "Oh No!"  In the story, a giant menacing robot is ultimately defeated by a super-sized frog... a frog that is then seemingly left unchecked to wreak his own havoc.  Well, Isaac decided to design a second robot, a new robot, to go after the frog:

The book's illustrator, Dan Santat, enjoyed Isaac's image so much, that he drew up his own version of Isaac's design! 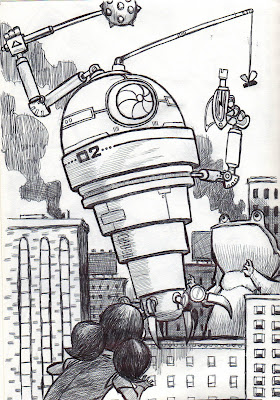 He shipped the picture to us, and - unbeknownst to Dan - it happened to arrive here the morning of Isaac's birthday!  It's now framed and proudly displayed on Isaac's wall.

You know of superstar kidlit blogger Tara Lazar, yes?  If not, go check out her fantastic 30 day "Picture Book Idea Month" Challenge (going on this very moment!)  Tara's debut picture book "The Monstore" is in production, set for a 2013 release.  Yea!

Tara and I were exchanging emails a little while ago, and she shared this cool bit of information:


"One of the main characters in THE MONSTORE is named Gracie, like your daughter.  I have to say it was the first name that popped into my head and I think it did because of reading Bookie Woogie.  So, in a way, that character was named after her."

Cool beans!  And congrats on "The Monstore," Tara! 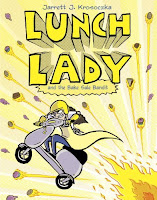 You may remember our review of the first two books in the "Lunch Lady" graphic novel series by Jarrett Krosoczka.  In the review, Gracie had this to say: "It's an action-packed book of yellowy wonder."

The books have been quite successful - in fact, the 5th book in the series, "Lunch Lady and the Bake Sale Bandit," is already set for a December 2010 release.  Well, look who's got a blurb displayed on the back of book #5: 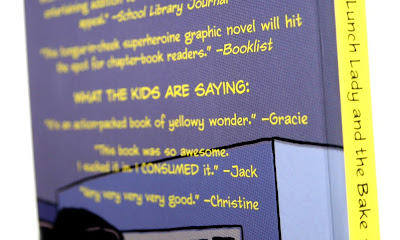 Congrats on a great series, Jarrett!
Posted by Z-Kids at 8:00 AM

Way to go, Isaac and Gracie!

And welcome back, it was great seeing your blog name at the top of my blog roll this morning.

Wow! That is just beyond cool that your son got a piece of original art from Dan. Talk about a treasure!

Good for Gracie too on getting a blurb!

Good for you for making books such a huge part of their lives.

That is all so very AWESOME and amazing! Not many people can list things like that! How cool!

This is one friendly industry, isn't it? When I read a post like this I am just SO GLAD to not work in insurance anymore!

It's so wonderful the connections you've made through books (and your blog) just within your own family--and then the way it comes full circle.

I will check out Tara's blog, and her challenge. Thanks for sharing!

P.S. Thanks for the info on your bookcases, too! I miss our built in book cases.

Oh, one more thing! I just posted a picture of my (part of)children's book collection, in its current over-stuffed bookcase from IKEA. Thought you might like to take a peek at it:
http://joytoyouandme.blogspot.com/2010/11/joy-in-collection.html

Wow. Original art by Dan based upon Isaac's idea!!! That's awesome. So is Gracie's quote on the LUNCH LADY book. No wonder they used it!

LOL about the insurance industry, Paula!