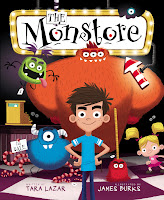 Dad:  We have ourselves a copy of The Monstore, by Tara Lazar and James Burks!
Lily (age 10):  The words and pictures are so good together, you’d think they were done by the same person.
Isaac (age 14):  The book is about this kid named Zack.  He goes to the Monstore, which is a store with useful monsters.
Lily:  The monsters are adorable.  Well, some of them are kind of creepy.  But mostly adorable.
Isaac:  Zack buys a monster in order to keep his little sister in line and keep her out of his room--
Gracie (age 12):  And what is his little sister’s name, hmmm?
Isaac:  Gracie.
Gracie:  Heh, heh, heh…
Isaac:  Where was I?  Gracie messed me up.
Dad:  We need a monster to keep *our* Gracie in line.
Isaac:  Yeah, EXACTLY.
Gracie:  Zack’s sister might be annoying, but she has an awesome name.
Isaac:  The monster he buys doesn’t work, so he gets another one.  That one doesn’t work either, so he keeps getting more and more and more monsters.
Gracie:  The monsters don’t keep Gracie out of his room, instead they help her annoy her brother.  Which is hilarious.  It’s the exact opposite of what he wanted.
Isaac:  At the Monstore there are no exchanges or refunds, so Zack had to keep them all.  He built up a huge collection of monsters.
Dad:  Zack’s not very bright.  You’d think he’d figure out pretty soon that buying monsters wasn’t working.
Gracie:  He’s not very smart.  Not as smart as his wonderful, beautiful, incredibly-named sister.
Dad & Gracie:  Hah ha ha haah hah!
Dad:  We do actually have it on good authority that this character is kind of named after you, my dear.
Gracie:  She is me.  Tara Lazar said that when she made up these characters, the girl’s name was just always Gracie.  And she thinks unconsciously she named her that because she reads our blog!  And it IS a lovely name.
Lily:  Why wasn’t *I* stuck in her head?
Elijah (age 7):  It would be fun and awesome to draw pictures for a book like this because of the monsters in it.
Dad:  You are our monster-boy.  You love drawing monsters.
Elijah:  Yes, I do.
Dad:  How did these monsters hold up compared to other monsters you’ve seen?  How is James Burks as a monster draw-er?
Elijah:  Better than me.
Dad:  So he gets a thumbs-up?
Elijah:  The monsters are awesome.  Really awesome.  The awesomeness of them is awesome.
Dad:  Would you guys want to have a monster?
Gracie:  It depends on what kind of monster.  I would like to have the kind that eats dinners you don’t like.  And I’d use him every day.
Isaac:  Then you’d starve and die.
Lily:  I’d buy a glow-in-the-dark monster.  That would be the most useful.  For my life it would.  Because I always like to stay up late.
Elijah:  I want that globby monster in the jar.  I’m pretty sure you could transform him into anything.  I’m pretty sure.  You could just shape-him-up and then make him do stuff for you.
Dad:  What do you think the most helpful monster would be, Isaac?
Isaac:  I’ve actually thought about this before.  Yes, I have.  And I’ve decided – at least at this moment I’m still feeling it – that the best monster would assist you with your pet peeves.  So, when someone leaves the faucet on and it’s barely dripping, the monster would turn it off.  Or if someone leaves the front door open and the flies are flying in, the monster would close it.
Dad:  That’s what children are for.  “Hey kid – go turn that off…”  You’ve got plenty of brothers and sisters for that…
Isaac:  Are you kidding.  I’ve asked so many times.
Gracie:  Yeah – he’s always like, “Turn-it-off–Turn-it-off–Turn-it-off…”
Isaac:  It doesn’t work.  That’s why I want a monster.
Lily:  The purple furry balloon monster is the cutest one.  It’s a girl.  I know because it has eyelashes.
Gracie:  Dad has eyelashes.
Elijah:  I have eyelashes.
Gracie:  Elijah’s eyelashes are way, way long.  The longest eyelashes of anyone I’ve ever met.
Dad:  I love the monster in the book that is just a teeny eyeball with legs.
Gracie:  Hey, what does that little eyeball monster even do?  What is he useful for?
Elijah:  He is just useful for awesomeness.

Author: Tara Lazar
Illustrator: James Burks
Published, 2013:  Aladdin
Like it?  Here it is

And this blog is useful for awesomeness, too! Thanks, Z-Family! It's been a life-long dream to appear on your blog!

Hi there! Dear, wonderful Z family!!! As always, I love your reviews (looks like great illustrations and how cute that one of the characters name is "Gracie"...and also love the Z family's artwork!

It has been for.ever. since I have done any blog visiting and blogging...but now that we have moved, I hope to get back to it.

I hope you all are doing well!!! I LOVE, LOVE, LOVE your books and have to say again THANK YOU all for signing in them. (With our move, I had safely put them in a box, but still have to come across them to unpack them...so I will wait until Christmas to give them to our older daughter for their family)...the other copies are to stay at our home. and the other copies for our other daughter to be given when they start having children...as well as the last copies to be given to our son when they start having children. :o) I have to say...I LOVE, LOVE, LOVE your books...um... I just had to repeat myself :o)

I hope you get a chance to stop by...I have not posted since November of last year!!! So, it is so exciting to find comments and the lovely visits again.

You guys are awesome. Really awesome. The awesomeness of you is awesome.

From: Your friend Eric

Oh my goodness you had me in stitches. This was a wonderful review of The Monstore. We are lucky to have a copy in our household too and we are obsessed, hahoom, the toddler is obsessed with it. Your monsters are a great deal more monsterly than mine, I am too ashamed to even photograph them lol. Thanks so much for linking in to the Kid Lit blog Hop.

I love the name of this book!

I'm going to order it for my little Grandson! He loves to giggle of 'Monsers!' He might really enjoy this!

Thank you for linking and for the amusingly wonderful post!

Love it! Awesome review of an awesome PB!

Hi, I've just discovered your blog and it's brilliant! What I really love about this post is that it illustrates how older children can enjoy picture books too. I went from teaching six year olds to ten year olds and was surprised to find very few picture books in my new classroom... now that I've stocked up, the picture books are much more popular than the chapter books! I think they're a great way to encourage older kids to read for enjoyment... in a short burst you get a whole story.
I've added your blog to my list with a link :) Can't wait to see which book you share next!

Carly, me, too! Through Julie Hedlund's site :) This was SO much fun to read, I never want to miss another review :)

Btw, I love Tara and certainly her books, too :) I purchased this REALLY well-done picture book when it was first published and was even able to get it signed at the Princeton Book Festival.