It's a funny thing about plans.  I've come to the conclusion that they exist primarily so that things-can't-go-according-to them.

Seeing that same old entry sit here at Bookie Woogie for months bums me out, so I thought I'd freshen up the scene and post a little family update.  When you last heard from us, we were taking a brief hiatus to get a new mystery blog rolling, then Bookie Woogie would be right back.  That was the plan.  But just a few days after I announced the blogging break, our landlords dropped a big surprise.  They were going to sell the house we'd been renting for the last 9 years, and they wanted us out in two months.  Didn't see that coming!  So our summer and fall consisted of house hunting, packing, cleaning, moving, unpacking, and... we're still unpacking.

Of course there was no time for extracurricular pursuits like blogging.  There wasn't even time for necessary pursuits like working in order to put food on the table!  Right now my work hours involve a whole lot of scrambling and catching up.

So about that other blog -- I'd still like to do it, but obviously it's not going to happen in the way I'd hoped - or in the "when."  I'll also get Bookie Woogie reviews going again as soon as I can - but honestly we're still in survival mode at home for a bit longer.  I do want to thank those of you waiting for our return!  (I for one have certainly missed Bookie Woogie!)

To close today's post, I thought I'd provide some literary content by sharing a few bookish photos of the Z-Kids... 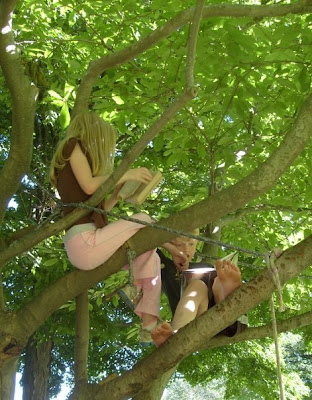 Here are Isaac and Gracie in one of their favorite spots at our old house.  If memory serves, I believe Gracie was reading L.M. Montgomery and Isaac had some Kazu Kibuishi. 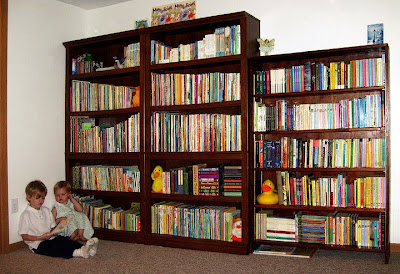 Elijah and Evangeline are in front of our new bookcases.  We lost a whole wall of built-in shelves at our old place, so this was one of the first purchases we had to make for our new home. 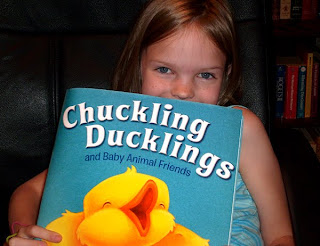 And anyone who really knows Lily knows that Lily really likes ducks!
Posted by Z-Kids at 8:00 AM

I was scrolling through my Google Reader the other day and wondered what had happened to you all! Glad for the update and I hope life settles down for you soon. You know...before Christmas and everything. ha!

You have been missed! I hope everything smoothes out for you and your family very soon.

Glad you are all getting a chance to settle in again! Such cute kids! Also really love those bookshelves, esp the middle shelf on the far left, it is cool the way the books dip in the middle and grow up toward the right side! :)

Glad to see a new update. Life gets like that. I LOVE, LOVE the bookcases. It makes me so happy to see so many books in one spot. The HUGE duck made me think of my son and then you posted the next pic. Maybe it's a third child thing. Hee! Hee! (My word verification is duck toc.)

Hope things are falling into place now! I know a little about it too - relocating and job searching for us too! Blessings to you all and hopes for a wonderful new home. Take care!

I just recently found you after you went on hiatus. I am sooooo relieved and thrilled to find out that it truly is a hiatus and did not instead turn into a permanent departure!!!! Best of luck with all the busy-ness and I look forward to reading all of you when you return!

Wow! You've been busy! Best of luck to you, and your family, during this time of transition.

Those bookcases are beautiful. Can you share where you found them?

Thanks for the responses everyone! I fully expected this post to sit here with zero comments since we'd been gone so long. We appreciate the well-wishes :)

Lisa, I did a lot of hunting around and comparative browsing. In the end I bought two 6 foot cases from Meijer (I think the chain is just regional). The 2 six footers are side by side. The shorter one we already had, picked up at a garage sale a few years back. We have lots of bookcases scattered around other rooms too, but it is fun to see these ones together in one spot.

I had wondered about you guys too. Thanks for the update. Sounds like the last few months have been pretty crazy for you guys. Glad to hear that things are settling down and there are more reviews to come! Cute pictures too! :)

We could never forget you! This is one of my absolute favorite review blogs! Good luck with the moving in and I'll be keeping an eye out for you. :)

Nothing more beautiful than a girl and her LM Montgomery books!

Great to see you back here in the blogosphere! My kids have all been ill for a couple of weeks and tonight's the first time in what seems like an eternity that I've had a chance to browse my favourite places - so what a delight to see you here! Have you had a chance to (re)read A House is A house for me since you moved? We love that one and it's a great one for moving home I think.