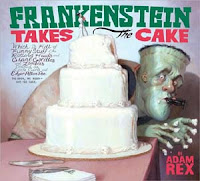 One of our family favorite author/illustrators is Adam Rex.  Last year with the launch of his most recent book, "Frankenstein Takes the Cake," he hosted a Monster Haiku contest on his blog.  For the prize, Mr. Rex would illustrate the winning poems and send his original art to the lucky poets.  The Z-Kids had fun learning about haiku and submitted these poems:

Fuzzy pink monster,
she dances for kids at night.
I want to see her.

His fingers wiggle
He reaches out his long arms
Stop, Tickle Monster!

It turns out there were over 180 entries and two grand prize winners selected by celebrity judges.  And one of those lucky winners was our own Lily!  Here's the art she won, which is now proudly displayed in the girls' room: 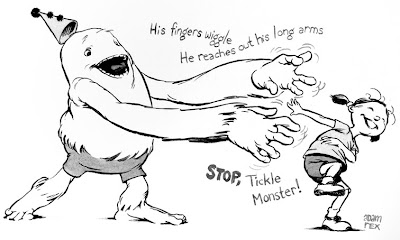 Lily wrote a nice thank-you note and mailed it to Mr. Rex along with this picture she drew of Frankenstein's monster and his bride:

After which, Mr. Rex then emailed Lily in return.  Lily thought his reply was hilarious and still talks about it:

What a great story! That was a fun contest and your kid's haiku are wonderful.

Wouldn't you know? Adam Rex is as great in real life as on the page.

I LOVE Adam Rex's books! What a fun contest for the kids! Congrats to Lily, how cool to have her poem illustrated by Adam Rex and have a silly email too!

That's so cool! I started a webcomic this year called Monster Haiku. Check it out at www.monster-haiku.com or at facebook.com/monsterhaiku.