Earlier this year we shared 20 favorite books of 2014 here and here.  After reading hundreds and hundreds of picture books, we are happy to present 10 more favorite titles that crossed our path at the close of the year.  The kids are each choosing one to highlight: 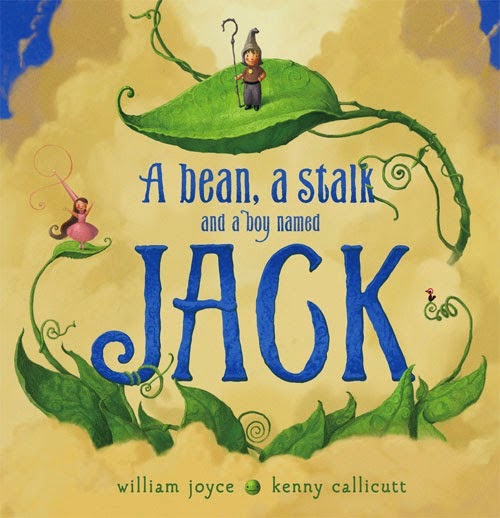 Dad:  Gracie’s kicking us off with “A Bean, a Stalk, and a Boy Named Jack” by William Joyce and Kenny Callicutt.

Gracie (age 14):  The story was kind of like Jack and the Beanstalk, and I thought “Oh, everybody knows that story.”  But it was different.
Dad:  Twisty.
Gracie:  Yeah, actually very different.  I like the twist.  Straightforward tellings are nice, but I don’t know if people would listen to that anymore.  This generation is lost.  In this book there was a bean, Jack, and a giant.  And those were the only similarities.  No golden goose, no harp, no Fee Fi Fo Fum.
Dad:  You’re right… no Fumming…
Gracie:  The giant was just a giant kid in a bathtub, chilling out.
Dad:  Now, the twist wasn’t ironic or sarcastic.  The book wasn’t turning the story on its head.
Gracie:  Oh no.  There were no mega-huge-surprises.  It was just a different way to tell the story.  Some giant kid at the top of the beanstalk was in the bathtub, using up all the water in the clouds.  What the people below don’t know is that when it starts raining again, it’s stinky bathwater.  That’s gross.
Dad:  What things stand out to you about the art?  I love the art in this book.
Gracie:  On every page, the sky is ginormous and the characters are miniscule.  Very tiny.  But it works.  I think he did it on purpose because the characters are just a smallish normal boy and a smallish normal bean.  He’s putting emphasis on how small and normal they are.
Dad:  The big empty backgrounds also make it more powerful when the stalk explodes out of the ground.  If the first half of the book had been full and busy, that moment wouldn’t have been as shocking.
Gracie:  The stalk is BIG.  It’s cool.  I like how it looks textured.
Dad:  Everything up to that point had been small, small, small… and then…
Gracie:  That stalk is like – WOAH – gettin’ all up in your face.  And it’s twisty.  That’s a reoccurring thing in the art – everything is twisty.
Dad:  The vines, the clouds, the princess’ ribbon.  Even the dirt flying up was twisty.
Gracie:  That’s what I said.  Reoccurrence.
Dad:  Anything else?  We talked about the backgrounds.  What do you think about the characters?
Gracie:  Dang, that wizard’s beard is so long.  And is that bird on every page?  That’s cute.  That bird needs a name.  I shall call him “Dave.”  And the king in this book is taking “embarrassing-dad” to a whole new level.  He's not a very good ruler.  I can see why Princess Jill was embarrassed... “Dad!  Stop making the nuns cry all over your feet…”
Dad:  Any last thoughts?
Gracie:  I think it’s a cute book.  It would be fun to read to little kids.  Ha ha… Of course, little kids love vegetables and taking baths – it’s their favorite!

Dad:  What book did you pick, Lil?
Lily (age 11):  “Louise Loves Art” by Kelly Light.  It is about a girl who is doing her art-stuff.  And she draws her masterpiece.  She also has a brother named Art.  And the brother draws all over her picture…
Dad:  Oh horrors…
Lily:  But I think he does it to be like her.  Because she has red glasses, and he is drawing red glasses on the picture.  He wants to be an artist like her.
Dad:  He wants to follow in the footsteps of his big sis.
Lily:  While she was trying to figure out where the masterpiece goes on the fridge, the little brother cuts it up.  And she’s like, “NOOOOOO....”  Then poor Art feels bad because Louise is really sad.  Then she looks at it and sees that Art made the paper into him and her holding hands, and then she says it’s okay, and she loves it.  So she puts it on the fridge, and they go draw together.
Dad:  Lovely.
Lily:  That’s what happens.  But I think the book is really about how she was kind of carried away with her masterpiece art, and she didn’t really pay much attention to her brother Art.  She thought her brother had ruined her thing, but she realized he was doing it because he loved her.
Dad:  So she didn’t have Louise-Rage.
Lily:  Well, she got mad.
Dad:  But she didn’t whack him or anything.
Lily:  No.  She loves Art.  And art.  If you didn’t know her brother’s name was also named Art, you’d be so confused.
Dad:  Have any of the kids in our family ever frustrated you?
Lily:  The other day I drew the perfect picture of Catbug, and Evie drew on it.
Dad:  Did you have Lily-Rage?
Lily:  I told her she had to ask before drawing on other people’s pictures.
Dad:  The illustration where Louise has paper with drawings spread out everywhere reminds me a lot of how you draw.  When I was your age, I would work on one picture for a long time.  But you are about Volume.  You grab a stack of paper and sit there cranking out drawings until the stack is gone.
Lily:  I’m fast at it.  I draw pictures of what I’m thinking about.  Pictures pop into my head.  Then I’ll have new idea related to the picture I just drew.  And it goes on and on like that.  But the last picture will end up totally different from the beginning.
Dad:  In the book, Louise says that art is “my imagination on the outside.”  That sounds like what you’re describing.
Lily:  It’s just drawing whatever pops into my brain.  So yeah.  It’s basically my brain on a piece of paper.
Dad:  That sounds disgusting.  Kelly Light said it much more poetically.
Lily:  Yeah!  Ha ha…  I have weird things that pop into my head.  It’s very interesting.  I draw pretty much everything.  On everything.  Sometimes on my homework.  Kelly Light was probably that kind of kid too, or her pictures probably wouldn’t look this good.  Because it takes practice.
Dad:  She’s good at drawing expressions and emotions.
Lily:  I love drawing expressions and emotions!  I especially love drawing sad people and mad people.  I don’t know why.  But I love it.
Dad:  What is you favorite thing about this book?
Lily:  That the little girl loves her little brother so much.
Dad:  Any last words?
Lily:  You did a good job, Kelly Light!  Go Kelly go!  I like your story.  It’s cute and lovely.  Lovely, lovely.

Dad:  What book do you have Elijah?
Elijah (age 9):  Sam and Dave Dig a Hole.
Dad:  And you had to fight for this book, didn’t you.
Elijah:  Yes.  It’s the best book.  Half the kids wanted to review this one.
Dad:  The author is Mac Barnett...
Elijah:  He also wrote the book “Oh No.”
Dad:  And a different guy illustrated this one – Jon Klassen.  He also did “I Want My Hat Back” and “This is Not My Hat.”
Elijah:  And look – Sam and Dave are wearing hats too.
Dad:  But nobody dies in this book.  Or do they....
Elijah:  Yeah, the ending is confusing.
Dad:  Tell me about this book...
Elijah:  A guy named Sam and a guy named Dave dig a hole.  They want to find something cool and exciting.  But they find dirt.  So they decide to turn another way.  But if they went straight down they would have found diamonds.  Every time they change direction, they were almost to the diamonds.  And the diamonds get bigger and bigger and bigger.  This is just – oh my goodness – that’s not possible!  The diamond is so big!!  I’m just sad for them.
Dad:  Do Sam and Dave feel bad?
Elijah:  Nope.  They have no idea there are diamonds.
Dad:  Do they ever find anything exciting?
Elijah:  Yes.  The bottom of the world.
Dad:  This book is kind of divided into two halves.  The first half is about digging holes and missing diamonds.  What is the second half about?  Is it clear what happens in the second half of the book?
Elijah:  Yeah.  Sam and Dave fall through the bottom of the world.
Dad:  Well, there is some hot debate about that…
Elijah:  There is?

For anyone who hasn’t yet read the fantastic “Sam and Dave Dig a Hole,” Elijah and I delve into some theories about the ending that get pretty spoilerish.  Have you read the book?  Do you want to know what Elijah and I think happened?  You can read that part of our conversation by clicking HERE…

Elijah:  Do you think the authors actually know what happens at the end?  Or did they write it that way on purpose so people could make up theories?
Dad:  That would be a good question for them.  So Elijah, do you think there is anything hiding in our yard that we could find if we just knew where to dig?
Elijah:  Maybe Indian bones.  Because a lot of Native Americans lived around here.  Ojibwe.  And Chippewa -- they are the same thing.
Dad:  We dig in the snow more than in the dirt.
Elijah:  Yeah, so we never find anything.
Dad:  Are there any lessons to learn from this book?
Elijah:  Dig straight. 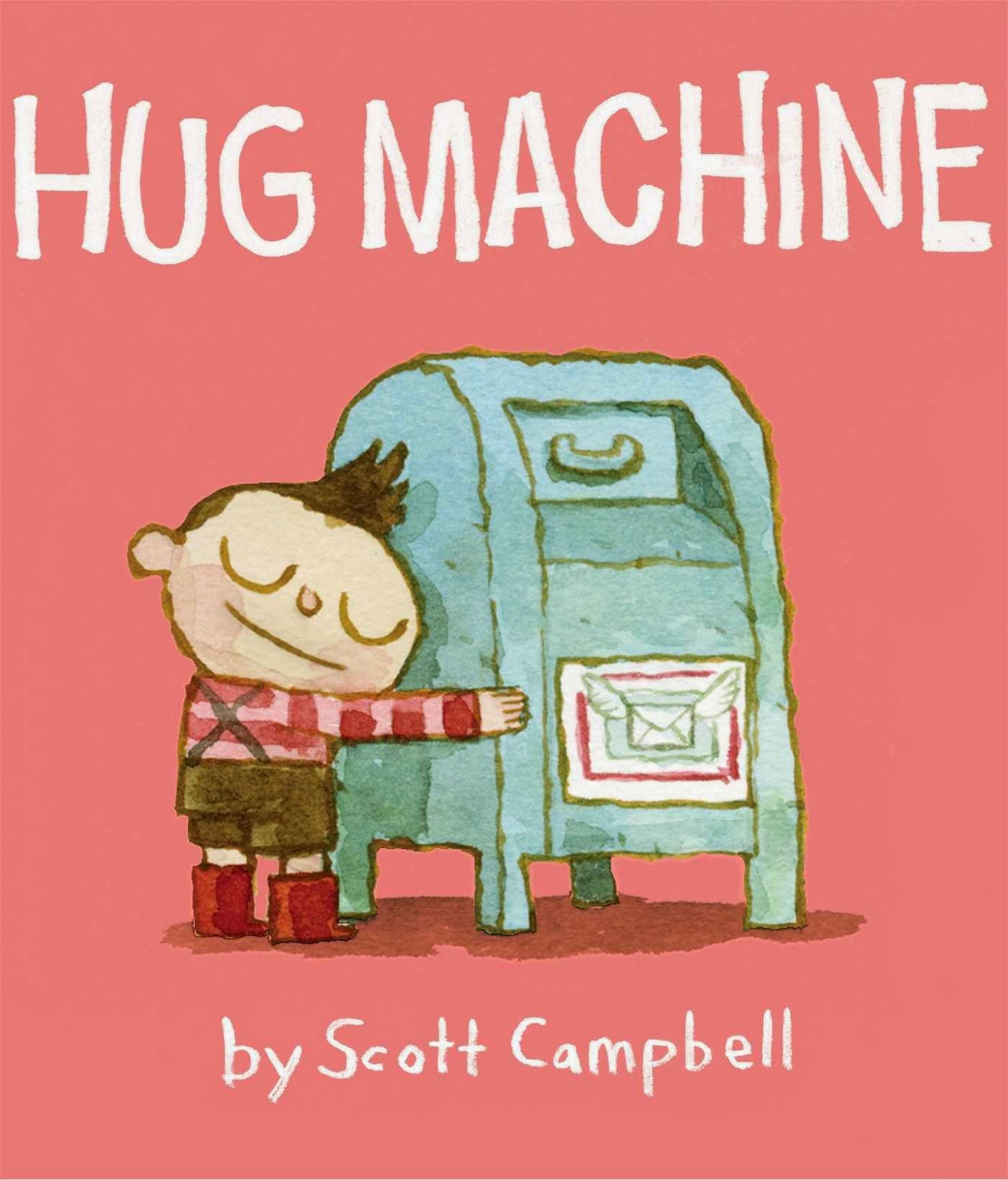 Dad:  Evie, what is your story pick?
Evangeline (age 6):  Hug Machine.
Dad:  By Scott Campbell.  And who exactly is the Hug Machine?
Evangeline:  A little boy.  He hugs everything.  He might be pretending he is a machine.
Dad:  Do you know anyone who hugs as much as he does?
Evangeline:  You are a hugger.  I am a hugger.  We hug all the time.
Dad:  Tell me about the hugs in this book…
Evangeline:  The boy starts out hugging his mom and his dad and his sister.  Then he starts hugging other people.  He also hugs a bear and a turtle.  Then he hugs a fire hydrant, a mailbox-thingie-ma-jigger, and a tree.
Dad:  Why do you think he hugs so much?
Evangeline:  Hugs never have to stop.  When you are sad or when you hurt your feelings, you get a hug.
Dad:  Hugs mean love.
Evangeline:  And love never fails.  And it never gives up.  Hugs can always keep saying “I love you.”
Dad:  So I guess I should follow you to school and keep hugging you all day.
Evangeline:  But you can’t follow me into the girl’s bathroom.
Dad:  Then you’ll just have to hold it.  Is there anything you think the Hug Machine couldn’t hug?
Evangeline:  He couldn’t hug his own hair.  How would he hug his own hair?  Let’s find out if I can hug my own hair...
Dad:  He might just have to give it a little love pat.  He hugs some weird things.  What’s the weirdest thing YOU ever hugged?
Evangeline:  I never hugged anything weird.  But I ate grass before.
Dad:  That is pretty weird. 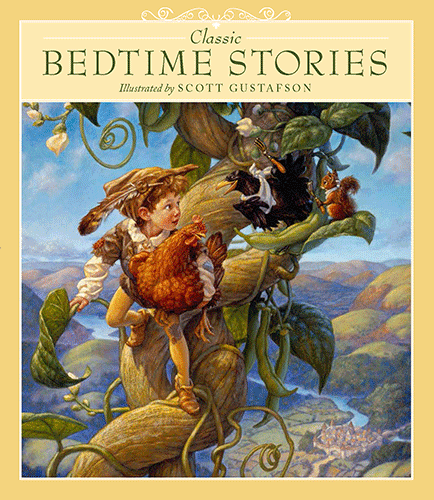 Art and Louise, by Lily

Sam finds a diamond, by Elijah

a warm hug from the Hug Machine, by Evangeline 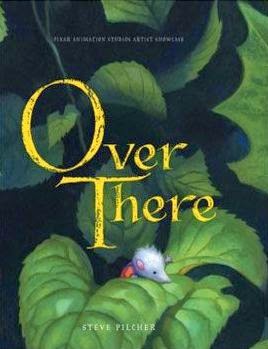 Over There
by Steve Pilcher 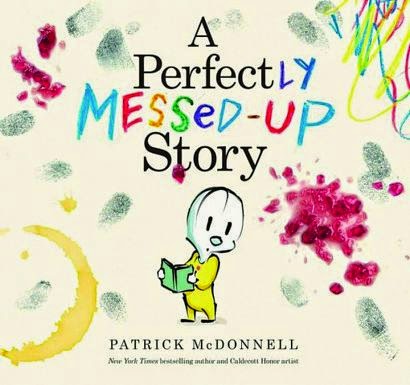 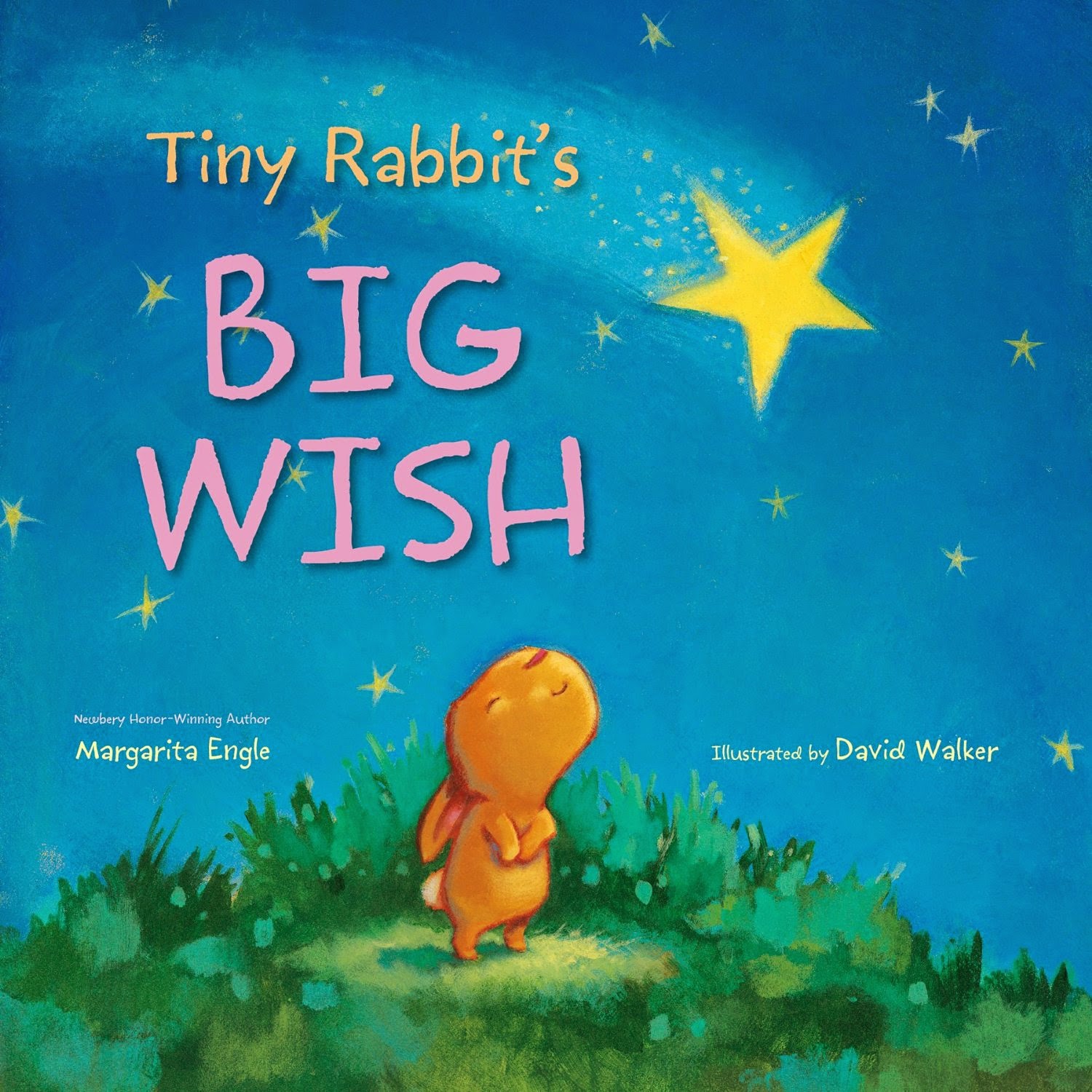 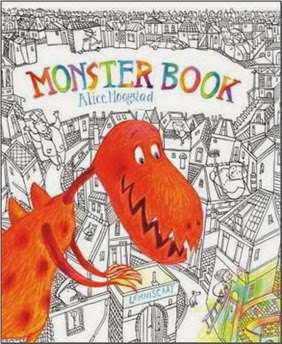 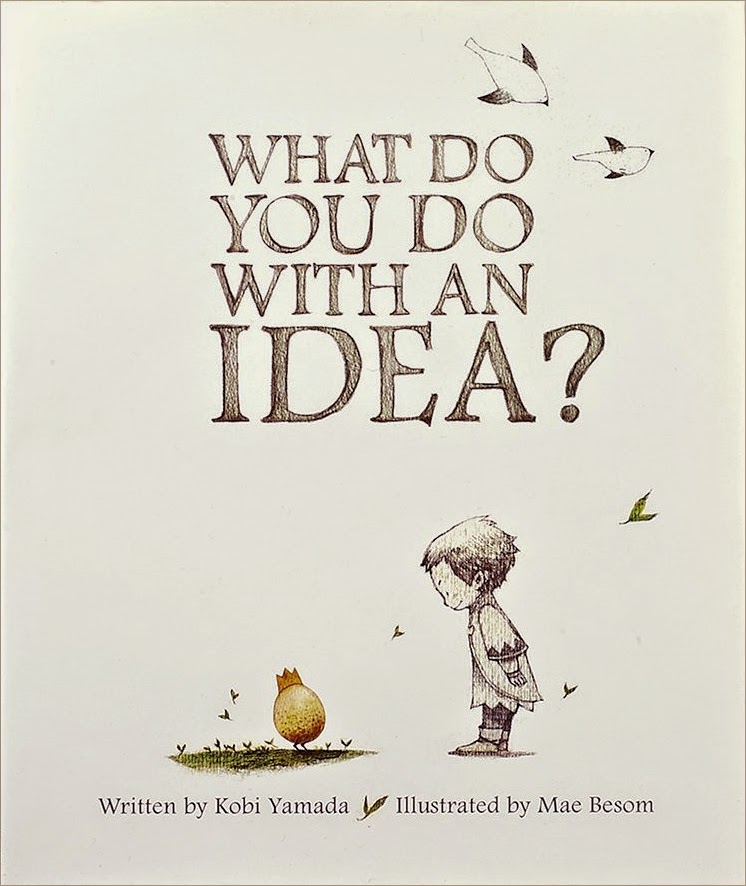 A Bean, a Stalk, and a Boy Named Jack
Author: William Joyce
Illustrator: Kenny Callicutt
Published 2014: Atheneum Books
Like it?  Here it is

Sam and Dave Dig a Hole
Author: Mac Barnett
Illustrator: Jon Klassen
Published 2014: Candlewick
Like it?  Here it is

Hug Machine
Author/Illustrator: Scott Campbell
Published 2014: Atheneum Books
Like it?  Here it is